This past July, I had one of the most life changing and wonderful opportunities of my life, performing musical theater in Italy! I have just returned back to the states, and boy am I jetlagged! I wanted to blog about the highlights of my trip, the wonderful people whom I met and what I took away from this surreal experience. So, let’s start at the very beginning, a very good place to start!

In early spring, I was accepted into Music Academy International for Musical Theater Performance, after submitting an audition video. The program would take place in a sleepy mountain town in Italy called Mezzano throughout the whole month of July. Although I was ecstatic I was accepted into the program, I was very apprehensive because it would be my first time internationally, first time in Europe (not to mention I’d be on my own) in addition to being a little nervous about what the program would really be like. Nonetheless, I was willing to take a chance!

My parents also wanted to tag along in the fun! Therefore, we left a week early before the program started to go see the sites of Germany and Austria! In Austria, my mother and I went to go do The Sound of Music Tour, to visit the locations used for the 1965 film. It was EXTREMELY touristy and campy, but my mother and I had a great deal of fun! Some of the sites we saw  included the Mirabell Gardens (where “Do Re Mi” was filmed), Mondsee Chapel (used for the wedding sequence) and the Hellbrunn Palace Gazebo (used for “16 Going On 17”).  However, the most spectacular site we saw no not even in the movie, it in a town called Sankt Gillen which over looked this beautiful lake, so clear and blue, simply breathtaking. After that, my parents dropped me off in Mezzano and I was ready to begin with Music Academy International.

The town of Mezzano, in addition to its neighboring towns of Imer and Fiera di Pimero, was simply spectacular. Everywhere you turned, there was another majestic view to hit you in the face! It truly was a storybook village untouched by time. My friends and I would keep joking that at any moment the town would just start to sing “Belle/Little Town” from Beauty and the Beast. Fortunately for me, I studied italian for two years in high school and for a semester at San Diego State so it was easy for me to decipher and assimilate to this italian culture.

And of course, when in Italy, MANGIARE MOLTO. Every restaurant in town had spectacular food and I loved them all! As a matter of fact, I lost 15 pounds over in Italy on this pizza diet! My favorite dish I had in Italy was Pollo allo Spiedo, a special type of roasted chicken with herbs and spices, so delicious! A special memory I had was every Friday having lunch with my fellow SDSU students and our professor Rob Meffe. I loved getting the opportunity to have a wonderful luncheon where I got to connect more to Rob and the other students who I love very much.

What I loved the most out of this program and what I will take away from this experience the most was the chance to make a lot of friends from this program. It was great to be around students from some of the top musical theater schools in the states who were just like me; had a deep love for musical theater, passionate performers, good head on their shoulders and knew what they wanted out of life and this career. I also got to make an Italian friend, Patrick! Patrick was the son of the landlord of the apartment of where I was residing. A fun memory I had with Partick was when he invited my roommate Stephen, my friend Coleman and I to go to a secluded lake to go swim in called Villa Welsperg. The lake was FRIGID but I made the guys dunk their whole bodies in the cold water. Patrick got to make a lot of friends with the other kids from the program! He even lead some of them on tour of Vienna. Che e bene amico!

Every weekend us students had the opportunity to explore the wonders of Italy! Some of the students hiked the Dolomites, some went to other cities like Verona, Venice or Rome! However, my newly acquainted friend from Pace University, Westley and I went to the enchanted (and tourist trap) city of Florence. It has always been my dream to go to Florence ever since tenth grade when I saw Adam Guettel’s musical The Light in the Piazza (this musical is also the reason why I decided to study italian). So the first stop on our trip was the site where Fabrizio and Clara met, The Piazza della Signorina. And of course, being the annoying American tourist I was, I began to re-enact the show in the piazza. Although I saw the many famous sites of Florence, I think the highlight of the trip to Florence was the opportunity to hang out with my new friend, Westley. I miss him very much and I hope to meet with him again soon in NYC.

And the beauty is I still met people I know…

I had the opportunity to work with some of the best professors from the top musical theater schools in the states; From University of Michigan, Linda Goodrich, Jason DeBoard and Logan Jones (who will be in the cast of Spongebob on Broadway this winter, go Logan!), from Pace University, Marishka Wierzbicki and Gillian Berkowitz and from San Diego State, my professor, Rob Meffe! I was extremely fortunate enough to make some wonderful friends over there from performers all over the world! I loved being around these guys because they love musical theater as much as I do, they have so so so talented in addition to being extremely dedicated to their craft and know what they want out of life. I miss them terribly and look forward to the day our paths cross once more.

As part of M.A.I., the musical theater students get to put on two gala concerts and two full length musicals (this year it was Godspell and Chicago). We were split into two groups, the cast of Godspell would be in Gala One and the cast of Chicago would be in Gala Two. Although us students were always separated into two groups, we loved to hang out with each other and always supported each other, it was a very nice camaraderie between the students. The first gala was superb! My fellow classmates from San Diego State killed it with their songs from Guys and Dolls. Also in the first gala had an amazing moment. One of the students Samantha Williams was singing the ultimate 11 o’clock number “I’m Here” from The Color Purple. As she started to sing it started to trickle rain, then as the song progressed it began to rain, then pour (HEAVILY), than THUNDER. It was as if her powerful and beautiful voice commanded the weather, it was truly a memorable night and how lucky I was to be a witness to it! I performed in Gala Two where I sang with my dear friend Coleman Campbell, “Lily’s Eyes” from The Secret Garden. 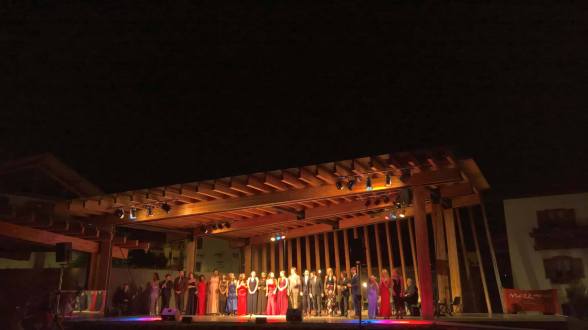 The musical I got to perform in was Chicago! I was very excited to be in this because I absolutely adore Kander & Ebb and anything ala Brecht! I played the role of Amos Hart, Roxie’s funny honey husband who sings the Bert Williams-inspired number “Mister Cellophane”. Now, I had some trouble finding the character of Amos because everyone plays Amos as stupid or one-dimensional, in addition to this show being produced so much,I wanted to find something new with this character so I wasn’t doing a carbon copy of someone else’s performance. But with the help of my wonderful director Linda Goodrich and analysis critique by Scott Miller, I began to understand the character and what he is/represents. As Scott Miller said in his book, Amos represents the unrecognized heroes or “nice guys who don’t win in the real world; sometimes nice guys get dumped on, and the Billy Flynn’s of the world get it all”. Amos and the Hunyak are the only two characters in the show who are not selfish, not “performing” or obsessed with fame and wealth. I decided to make Amos not one dimensionally stupid, but someone who wants to be smart but can’t be, making upset and little frustrated when he can’t be. He wants to be sexy and popular like Billy Flynn but never can. Amos does have moments where he stands up for himself but other people just keep pushing him down. He was the most interesting character I’ve played so far and I loved doing this show with a wonderful creative team and cast. (You can see my performance of “Cellophane” on my website under videos). 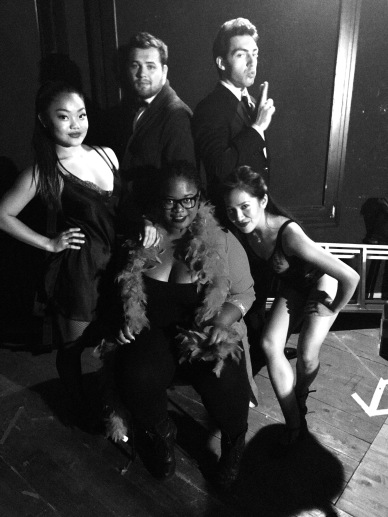 And all that jazz…..

This trip to Italy was truly life changing and I am beyond grateful that I had the opportunity to do this wonderful program! I miss all my friends and wish I could relive this experience all over again just to be with them once more! A huge thank you to the wonderful ladies who organized this program, the amazing faculty who came out to Italy to help teach us students, Patrick and my parents for allowing/ helping me go on this journey! Till next time, arrivadella Italia!